I'm going to start introducing you to the cowboys and cowgirls whose work will be featured in the upcoming Cactus Country anthology. First into the shoot is Troy Andrew Smith. 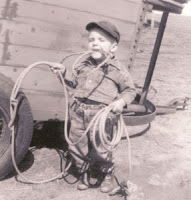 This is Troy in full cowboy gear when he was just three years old. So I guess he really, really wanted to be a cowboy. And below is Troy today on the cover of one of his cds. 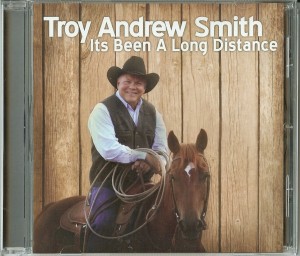 Troy did a book with High Hill Press this summer, it's a collection of short fiction, articles about the west, poetry and essays. He is also a songwriter and entertainer...and an actor. He was in HBO's Deadwood a few years ago. I remember one conversation Troy and I had when we were working on his book. I asked what scenes he played in in the series because I watched it religiously. He said, "If you saw a pair of dusty boots, someone swinging through a pair of batwing doors, or a cowboy butt walking down the street, that was me."
Troy has a great story in Cactus Country Anthology Volume I...here is a snippet. It's called Ace's Colt.
Sam was a young man who had the eye and soul of an artist.  He saw the beauty in things when other people never even saw the thing.  But, he had learned long ago that no matter what his mind’s eye saw, his fingers never seemed to be able to put it down in a picture. At least not a picture anyone would recognize as art.
At the moment though, Sam wasn’t concerned too much with art, or beauty, or even the creek that ox bowed behind him. His main concern at that very moment was to figure out how to get loose from the dad blamed elm tree he was leaning against?  Actually, leaning might not have been the right word to describe his position.  He was really doing as much hanging as he was leaning.  He looked more like a scarecrow with his arms out to his sides and points of barbed wired sticking out of his shirt sleeves.  You see, at some time or another, during the old days, around the time of the territory becoming a state, some settler had tried to homestead the place.  Sam was sure money had been tight back then and they had nailed the wire to the elm and several other trees to save the cost of fence posts.  It was this wire that now held him against the tree.  He wasn’t sure how much he was bleeding or how bad he was cut, but there was no doubt he was.  Way my luck's running in this deal, he thought, I’ll catch lockjaw from this old rusty wire and starve myself to death.
I guess this accounting of how Ace’s Colt, the dun horse tied to the snubbing post, had caused Sam, a pretty fair bronc wrestler in his own right,  to pretend to be part of an elm tree, would all probably make more sense if I backed up a few days in the telling?  See, it started when he was in town and ran into Jim Dunn the foreman of the ranch that was Sam’s reluctant neighbor.
Visit Troy's website to read more of his work and learn a little more about a true cowboy.
Troy's Website
Posted by Unknown at 11:05 AM