Lucille Ball was one of my favorites and this morning when I saw that it would have been her 100th birthday I tried to figure out how I could say happy birthday to her on here, a blog that I vowed to keep western. Then I remembered Fancy Pants. She wasn't Fancy Pants, that was Bob Hope.  It had probably been 30 or 40 years since I'd seen the movie, maybe even longer. But for some reason just the thought of it made me smile so I decided to check it out. I watched in online early this morning. I didn't smile, I laughed until my sides hurt.
The whole premise is that a stage actor is convinced to play the role of a butler for a Western family who are about to host President Theodore Roosevelt. They want to appear more high brown than they are. The deception is eventually uncovered, and the actor and the family's daughter eventually fall in love. Bob Hope is the actor, and Lucille Ball is the daughter. The movie is silly, often verging on the edge of total chaos, but it's funny. Not a true western I guess, but a feel good story with western scenery and plenty of horses. Close enough. And I had to have an excuse to say Happy Birthday, Lucille Ball. 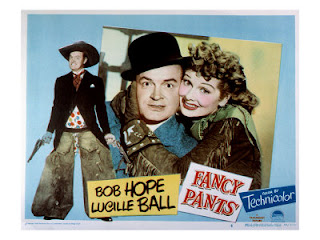