Thinking About the Old Days

Bright and early this morning, a big truck parked in front of my house to drop off a bunch of angry looking machinery. I guess they meant it when they sent me a notice awhile back that said I should not park on the street as of July 20th until July 29th. They're repaving! Our tax dollars at work. And how ingenious to schedule it for the hottest week in history. I think maybe the heat makes the blacktop dry faster or something. Anyway, while I was watching them unload all the expensive looking equipment, I got to thinking about the "old days." In the old days they didn't have trucks the size of a house or machinery that dug and ground the dirt and old concrete, they had horses and mules and oxen, but most importantly they had men who didn't mind hard work. Men who worked with their bare hands, a shovel, and a horse or mule. I never tire of hearing the story about my grandpa and how he dug basements under houses by hand. He would dig, put the dirt on a wooden sled, then climb up and move his horse forward to get the sled out of the hole. Then he'd climb back in and do it all over again. He used the same horse to move snow from the brick roads of town so that wagons and cars could make it through.
Even farther back than Grandpa's old days were the days when the hard work of men and animals built everything in this country. Roads were dug and smoothed through forests and mountains. Trees were chopped and turned into lumber so that towns could be built. And in the early days it was all done without the benefit of heavy equipment. Men and animals did the heavy lifting, the grading, the moving of earth and rock. I decided to do a little research. Here are some photos I found to show the way it was done in the "old days." I think I'll print them off and take them outside to the crew standing at the end of my driveway. Maybe it'll make them feel a little better while they labor in the hot summer sun. 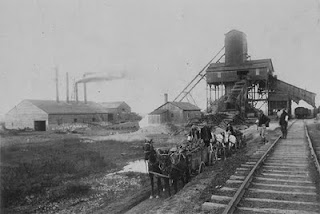 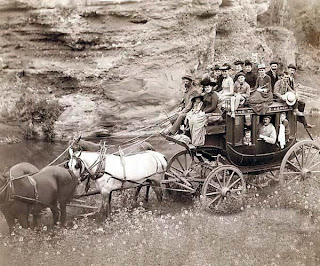 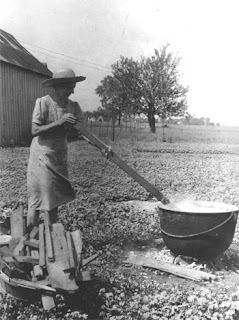 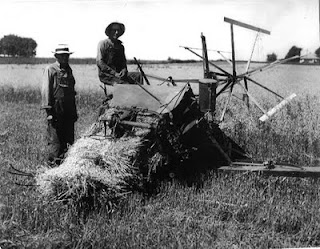 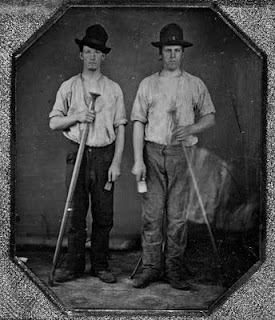