Let's All go to a Rodeo!

My Uncle Jack used to rodeo. That was before the high dollar prize money, the private jets, and the endorsements. In the old days Jack traveled to the rodeos in an old beat up Ford truck pulling a trailer held together with bailing wire. It wasn't just Jack that traveled to the rodeos, it was Jack and his old horse Beaver Butt. That's right, his horse's name was Beaver Butt. The story is that when Jack got him his tail had become so matted that it stuck out like a Beaver tail. He looked a lot better after Jack had him for awhile, but the name just stuck.

I don't even have any pictures of Jack's days in the rodeo, but I remember watching him a few times in Fort Madison, Iowa when I was a kid. He was pretty good. Even made it to the Nationals a couple of times. But broken bones and no medical insurance drove him out of rodeoing.

The other day something made me think of those rodeos in Iowa and I did a little research. Rodeos are major events now and I hope that if you haven't already, you make plans to see one someday. There's nothing like it. Enjoy the links and photos below.

The beginnings of rodeo can be traced back to the ranches of the early 1700’s, when the Spanish ruled the West. The Spanish cattlemen, known as vaqueros, would influence the American cowboy with their clothing, language, traditions and equipment which would in turn influence the modern sport of rodeo. Duties on these early ranches included roping, horse breaking, riding, herding, branding, and much more. 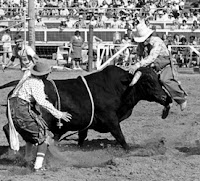