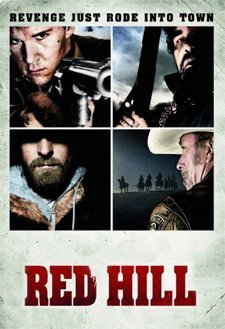 Now, this isn't a Western in the traditional sense. It doesn't take place (or, in the case of Spaghetti Westerns, pretend to take place) in the American West. There are no natives, helpful or otherwise. And rather than a Western drawl, the characters speak with an Australian accent.

Despite the fact that this film takes place in Australia, it still somehow manages to capture the essence of the Western. With the exception of Shane, the characters are rough around the edges, and all of them dress fittingly for a modern Western. The Australian landscape functions well as the backdrop, becoming another character with its dirty red hills and scrubby trees.

The plot isn't the most original--a young cop with past failings moves to a new town with his beautiful, pregnant wife and is forced to prove himself when a convicted murderer breaks out of prison. However, the direction of this movie is top notch in terms of beautiful vistas and action scenes, and the no-nonsense style of acting is hauntingly reminiscent of of the Westerns of old.

If you have a couple hours this weekend and happen to have Netflix Streaming, give an Australian Western a chance.
Posted by Unknown at 6:07 PM