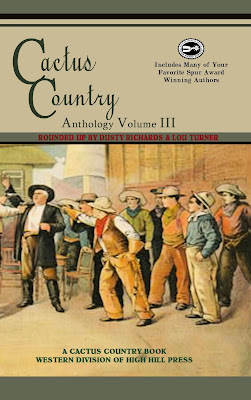 Cactus Country Anthology Volume III is in the works! It will contain works by authors such as the cowboy Dusty Richards, the prolific Matt Braun, the award-winning John Nesbitt, and the grandson of the real Rooster Cogburn, Brett Cogburn. As you can see, some of the best Western writers of the era have been chosen by Lou Turner and Dusty Richards for this anthology, including many past Spur Award winners.
Dusty Richards has published over a hundred books in addition to many short stories and articles. He's been the recipient of many awards, including two Spur Awards in 2007: His novel The Horse Creek Incident received the award for Best Original Paperback Novel, and Comanche Moon won for Best Original Short Fiction.
Brett Cogburn is the great-grandson of the real Rooster Cogburn, who inspired True Grit. Speaking of which, if you haven’t read the book or seen either of the movies, clear your schedule and do yourself a favor. I think the Coen brothers’ rendition was particularly well done. Hailee Steinfeld might be one of my favorite up-and-coming actresses based solely on that movie. Sorry for the tangent--I just watched that movie again.
John Nesbitt, author of twenty books and winner of three Spur Awards, is also featured in this new anthology. Some of his most recent work includes a novella, Dead for the Last Time;  a novel, Poacher's Moon; and a traditional Western, Not a Rustler.
Also included is Matt Braun, considered by some to be the best and most authentic current Western writer in the country. Born in Oklahoma to a long line of ranchers, Braun writes what he knows—the West—and his stories are often based on reality. Braun was raised among the Cherokee and Osage tribes, where he gained respect for Indians, and he learned their philosophy that each man has the right to choose his own path. Braun has spent the majority of his life wandering the West, and has won a Spur Award and the Festival of the West Cowboy Spirit Award, among others.
Braun currently has 40 million books in print and his book, Black Fox, was made into a mini-series by CBS. His short story collection, WesternLore, is set to be published by High Hill Press this June. The book’s launch, which Braun will be attending, will be at Western Writers of America Convention.
With this new anthology comes yet more proof that Western writing is far from dead—amazing, authentic stories are still being produced by those for whom the West is still the great frontier.