Max Evans is the real deal.

I've recently been doing research on a western writer name of Max Evans. I'd heard the name of course, and knew he was one of the legends, but that was about all. After reading about him, I realized I knew more than I thought. He wrote books that I saw on the silver screen. Books that when they ended up as movies starred some of my favorite actors. And I'm sure you have caught on by now that movies are my thing, especially westerns. I'll do my John Wayne immitation for you if you ask. Please ask.

Anyway...back to Max Evans. Wow. What a writer. And he is truly one of those western wordsmiths that make you see the west up close and personal.  Some of Max's stories are set in more contemporary times, but they all deal with what the life of a cowboy is like. And through the eyes of a great writer, we can all be there.

There is a 1999 article about a movie called The Hi-Lo Country. It's made from a Max Evans book.
L.A. Times article about The Hi-Lo Country, 1999.
Watch this interview with Max.
http://www.youtube.com/watch?feature=player_detailpage&v=FixQwse20hM
The Rounders was one of my favorite movies. I loved Glen Ford in anything and Henry Fonda did some of his best work in westerns. Max is also an artist. Here is one of his paintings. "Late For Supper."  Click on the link below to see more of his work.
Ol Max Evans tells literary stories in paintings and drawings. 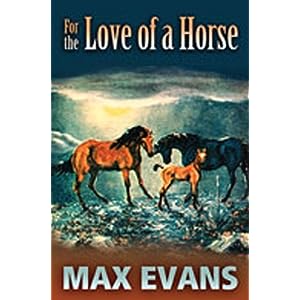 I ordered this book from Amazon today. I'll let you know how much I love it.

Max Evans (1990)
Cowboy, rancher, trapper, prospector, artist, and for over forty years an eminent figure in Southwestern letters, Max Evans was born in Ropes, Texas, in 1925. He served in the infantry in Europe in WWII and published his first book, Long John Dunn of Taos, in 1959. Evans’s The Rounders (1965) and the film made from it, introduced him to Hollywood and associations with such directors as Sam Peckinpah, about whom Evans has written two seminal books. The author’s The Hi-Lo Country, 1961, also became a beautifully rendered movie in 1998.
Evans is also author of The Mountain of Gold (1965), Bobby Jack Smith, You Dirty Coward! (1974), Bluefeather Fellini (1993), Faraway Blue (1999), and most recently Madam Millie (2002), a no-holds-barred biography of a Silver City, New Mexico, bordello keeper. He is co-editor of a book of short stories written by ranchwomen and cowboys, Hot Biscuits, (2002) that he worked for twenty years to collect.
Max Evans lives with his wife Pat in Albuquerque, New Mexico. And if you want to meet this great artist and writer, he'll be at the WWA convention in June of 2012 held in Albuquerque this year.
Posted by Unknown at 4:25 PM